This book has arisen out of my love of Britain and of almost everything British. Of course, I cannot say with Charles Churchill Be England what she will / With all her faults, she is my country still (“Farewell”), as England is not my country of origin, and not even my country of permanent adoption. And I could only go along halfway (not all the way) with Michael Flanders and Donald Swann when they said The English, the English, the English are best! / I wouldn’t give tuppence for all of the rest (“Song of Patriotic Prejudice”). This is simply because in my love of genealogy and heraldry, I love them equally well: the Lion, the Dragon and the Unicorn, and all they stand for. This is also the reason why I have long since elected to talk and write about British civilisation, and not just English civilisation. I would even go as far as to confess, unashamedly and unreservedly, even at the risk of being considered unpatriotic, that if God Almighty had offered me the chance of a second life, I would have chosen any place in Albion from John O’Groats to Land’s End, or from the South-East Coast of England to the Highlands of Scotland. This is a bird’s eye view of British cultural history seen against a balanced background of political, social and economic history. It is intended for full- and part-time students of English in higher education institutions, for long-distance students, as well as for the interested general reader with some knowledge of English. It is hoped that history masters in secondary schools and even academics, whether Anglicists or professional historians, may derive some measure of benefit.
Brand: Institutul European
Categoria: Books / Carte/Istorie/Istorie universala 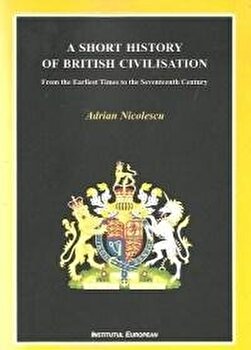