History, as they say, belong to the victor. Over the years, viewpoints invariably become accepted as fact. It is the writen’s job to question that fact, to push at the boundaries of established belief and – possibly – to suggest other ways of looking at things. These stories are speculations no more, no less. They are possible alternatives to current beliefs and, as such, may well be regarded as Speculative Fiction. The one element that is common to them all is their intention to weave the storyteller’s web – without that gentle meshing of image and idea that might just as well have been written as pure interpretative history. All the characters portrayed here are real people, men and women who actually existed. It is important to note that the stories are not always meant to be taken totally seriously. Or are they? I may have written them with a decided (tongue in cheek) feel but that does not mean that they might not be true and accurate dispositions of how things really happened. At the end of the day, it remains up to the reader to decide on that particular issue.
Brand: Institutul European
Categoria: Books / Carte/Fictiune/Moderni, contemporani 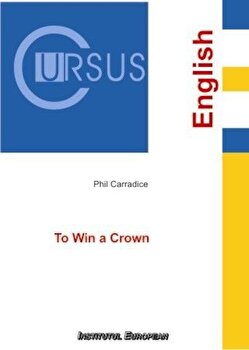 To Win a Crown/Carradice Phil