The volume (Im)Migration Patterns: Displacement and Relocation in Contemporary America contributes to today’s ethnic and migration studies debates, by including essays that explore patterns of immigration into the United States of America and the European Union, as well as current ways of coping with the experiences of displacement and relocation in an increasingly globalized and mediatized world. Bringing together voices and visions that freely migrate between geographical and cultural spaces, as the contributors to this volume work in the United States of America, the Netherlands, Bulgaria and Romania, but often travel, study and lecture elsewhere, the current volume is a living proof of the rich patterns that external and internal displacement and relocation determine (in the academia) as well as of the valuable insights inherent in such trans-national/cultural projects. The editors trust that the fruitful intersection of perspectives, disciplines, theoretical approaches, demonstrations, idiolects and dialogues captured between the covers of the collection will inform and inspire readers, while engendering further ideas, responses and reflections on these and connected themes.
Brand: Institutul European
Categoria: Books / Carte/Fictiune 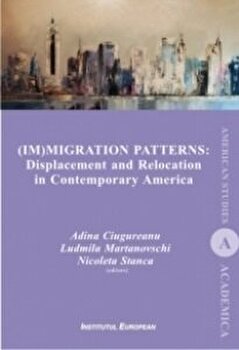