The volume is an expression of the renewed interest in the reassessment of Gothic literature and culture in Western academia, especially due to the cultural studies’ recuperation of popular culture in general and of sensationalist art in particular. Built on the recent critical re-conceptualizations of the Gothic and incorporating elements of psychoanalytical criticism, gender studies, and studies of trauma and memory, the book highlights the ways in which the American Female Gothic serves, on the one hand, to enlarge and redefine this literary genre in the United States and, on the other hand, contributes to the rewriting of American history and experience from the perspective of those whose voices are not always audible in the official discourse about US realities.  Given the low interest in the Gothic and Gothic Studies in Romanian cultural and literary criticism, the book constitutes the first attempt at assessing the American Female Gothic through the study of authors such as Shirley Jackson and Joyce Carol Oates, whose works are currently being recuperated by Western academic criticism. Similarly, Edith Wharton is valued rather for her realist contributions to the depiction of American society, while her ghost stories are frequently overlooked. Starting from the supernatural and mystery fiction of these three women authors, the present work provides a detailed overview of the Gothic rendering of domesticity, gender roles, female oppression and abuse against the background of American society and culture in the 20th century.
Brand: Institutul European
Categoria: Books / Carte/Sociologie, stiinte politice/Stiinte politice 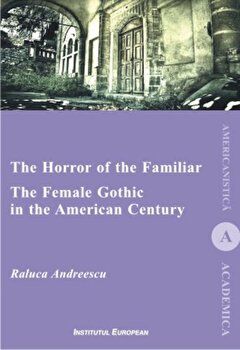 The Horror Of The Familiar. The Female Gothic In The American Century/Raluca Andreescu