The volume the American tradition of Descent/Dissent: the Underground, the Countercultural, the (Anti)Utopian comprises a series of essays that were presented at the Romanian Association for American Studies biennial conference, under the same theme, organized by the RAAS, the Romanian-U.S. Fulbright Commission and the Faculty of Letters, Ovidius University, Constanta on October 7-9, 2010. the studies included in the volume explore the American repercussions of descent/dissent from an inter- and intra-disciplinary perspective that combines literature, literary theory, history, art, sociology, anthropology, cultural studies, film studies, geography and political sciences. they also interrogate the contemporary atmosphere of dissent in the United States at a time when the economic, the social, the political and the cultural give rise to underground, countercultural and (anti)utopian movements and positions in the U.S. Given the chosen topics and the cross-disciplinary approach, the volume addresses both informed readers and a very large audience.
Brand: Institutul European
Categoria: Books / Carte/Sociologie, stiinte politice/Stiinte politice 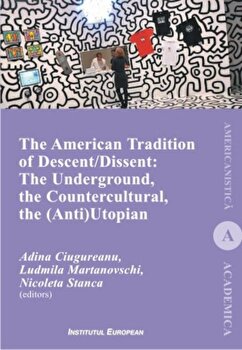