The main theme of the book, the intelligentsia’s position in the 1960-1980, represents a synthesis of the movements the academic world was undergoing in the context of the evolution of the universities, especially in the U. K. and its visible effects. The book follows the characters and the contexts imagined by Malcolm Bradbury from different points of view: social, academic and linguistic. As the theoretical approach is a cognitive one, the book has the text on the first position and attempts to justify Malcolm Bradbury’s options for certain lexical choices or the recurrence of grammar structures in the author’s works. The book is divided into two parts: the language of the fiction and the language of criticism. The bridge between them is represented by the pseudo-novel: My Strange Quest for Mensonge, an x-ray of the university teacher, caught between conferences, literary movements and his own Ego. The book is an invitation to reflect, criticize and then understand the literary environment, floating between the social requirements the performance required from it.
Brand: Institutul European
Categoria: Books / Carte/Fictiune 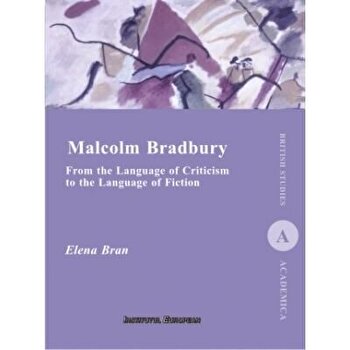